So, Hubbie and I love action, adventure, sci-fi movies. Just love them. We adore them so much that we've been terribly forgiving in the past of movies of which critics and friends have not been so forgiving. But, I must say I didn't like the latest Spidey and I think it's mostly because I'm a mama.

Most of you are probably now groaning because you are sure that I have let my neurotic self perseverate on the possibility that Bug might actually be bit by a radioactive spider. I mean, Hubbie DOES work with LASERS and all. I mean who can tell what he drags home from these wackie labs from the outskirts of civilization, like Boston?

Really, I didn't like the movie because Spidey is such a divided soul. For three movies, now, count that as at least 6 hours, we've wanted Peter Parker to stand up for himself, but we've been relieved that at least he has an alter ego that isn't such a whiney wimp. Peter has a balance, but it's unintegrated. He can't sling his web on his silly editor-in-chief and tell boss-dude really what's the hey-ho.

It might be the division of personality that attracts us to these movies. Our sense of struggle with uniting our disparate passions, moods, and desires. But I want my children to find a more integrated balance. I want them to have role models that are proud of their faults and their strengths. Most of all, I want them not to be overtaken by alien black goo.
Posted by Jenna at 5:06 PM 1 comment: 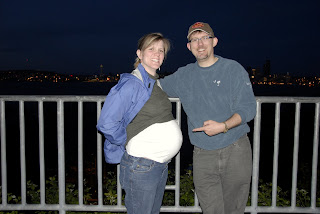 Years ago, my husband and I read an article on tattooing. It stated that some Native American cultures believed that one must have proof that one had lived on this earth in order to pass onto the next life. Some of that proof came in the form of tattoos that marked important events in one's life.

I've always been a bit of a pansy about tattoos. I've wanted one, but never knew where to put it or what to actually tattoo onto myself. When I was pregnant with my first son, I blossomed in stretchmarks in the 8th month. I had lotioned and hydrated inside and out trying to stave off the dreaded stretchmark, but I got them anyway and a healthy 9 1/2 lb. baby too. When I had showed my husband my first stretchmark, he had said, "There it is. Your first tattoo."

Last night, there was a program on TLC about a woman who had given birth to a set of twins and a set of sextuplets. She laughed at how her two-year post-partum belly looked like "the jowls of a dog." A plastic surgeon donated a tummy tuck to her and off she went, under the knife. The program also stated that tummy-tucks have been on the rise due to their high success in correcting post-partum bellies. Her post-surgery stomach looked beautiful. Smooth, flat, young again.

I've had my own inner tiffs with my body image, and after this second pregnancy, I do worry about whether or not I'll get my flat belly again. But, the TLC program made me a bit sad. Only because I would like the post-partum belly to not be something that must be fixed or corrected. I would like this struggle with my body to be my own and not some side effect of the society in which I live. I would like my stretchmarked, pouchy tummy, wide-hipped, self to be as wanted in the public eye as the flat bellies that live among us. I would like my "tattoos" to be seen as my husband sees them. Scars. Proof. Evidence that I have carried a life to term on this earth. I know this change I'm seeking begins with me and I will work on it. But, right now, I am off to the aquarium with my son.

So. Right now, I really don't mind diapers, even on an two-year-old. It's actually easier for me than worrying about huffing it to the closest available toilet while at Target. If we didn't have an impending addition, we would probably pursue official potty training with more brio. However, right now, Bug is really great at using the potty when he is completely naked and he kind of trained himself to do this. This kind of bars us from Target and other public places, but I'm happy to practice at home first. So, I bought some undies, just to see how Bug would respond. I bought Thomas the Train and Lightening McQueen undies. Super cool for the Bug. He put the Lightening McQueen undies on that have the car on his bottom and ran around the house saying, "My bottom so fast mama. Lighting Queen fast. Go fast." This lasted for at least 45 minutes to an hour. Really. Then when he had to go potty, he refused to take the undies off. In fact he had a melt down, urine infused, snot rubbing, drool dropping, prone on the floor tantrum when asked to take them off to go potty. They are too cool to take off you see. Why would anyone want to take "Lighting Queen" off one's bum to go potty? What kind of nut would ask the Bug to take off such glorious undies? The Mama. That's who.
Posted by J at 6:57 PM No comments: 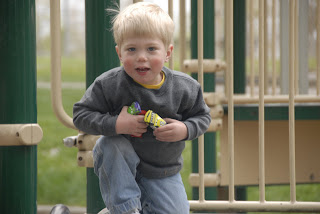 Bug has never had a sense of attachment in the way you read about in books. I've always joked that he is a working mom's dream. He's so secure in himself that when I drop him off at a neighbor's or with a sitter, new or otherwise, he rarely says, "Bye, Mama!" much less whining at my departure. Often he's in the other room before I can look like a good parent by acknowledging my impending absence. Lately he started to bestow kisses and hugs, but not out of necessity or my request...purely out of his sense of fun. 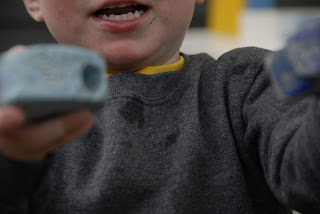 When we're off running errands, playing at the park, doing yardwork, he's either really close..... 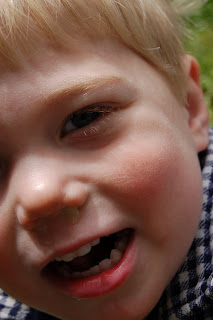 Or off and running... This looking back thing is a relatively new phenomenon. It's pleased me in that at least he's somewhat curious about what I'm doing at the same time. I don't have a picture of it, but yesterday at the playgroup we've joined, we were at a park and he actually had a sense of boundaries. He never went too far, even when the park-n-rec garbage truck trundled under the evergreens, right past his very eyes. He never left a self-defined radius that was miraculously comfortable for me too. I'm hoping this trend is one that lasts for quite some time... 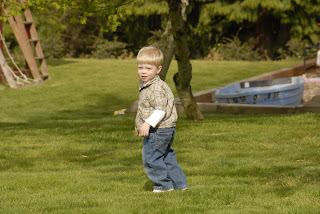 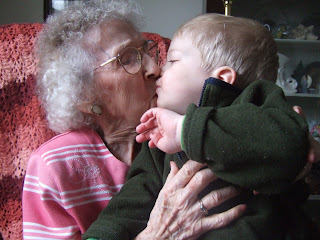 Last month we went to Minnesota for a week while M, Bopa, and Uncle J worked on our kitchen. I'm not sure if it's because most of my family is far away, or if it's just who I am, but I've always been trying to capture those fleeting moments. I've been faulted for having opinions and giving advice and talking up a storm in the past, but if it's good enough for me and I care for you, why wouldn't I share? 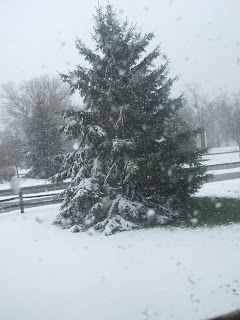 So, now, with my family away and my son growing and another on the way, I'm a little stuck. There are times that I just can't share. Like, the sound of the large flakes in a late spring snowstorm. They landed on this little glass window embedded in my parents' front door when I accidently left the screen door open to let Coopman out. They made this wet, tapping sound that gave me pause. I hadn't heard it in years as M is a bit afraid of Minnesota winters. Don't question his manhood though...did you see my kitchen??? 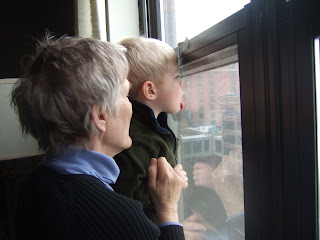 That afternoon, Bug and Mimi looked out Great Grandma's apartment window. Of course, if this was only the third snow you've seen, you'd want to lick the window. And I don't know how to share the most important bits of these moments...how Mimi just let him lick the window and talked about the snow and the train they heard in the distance. 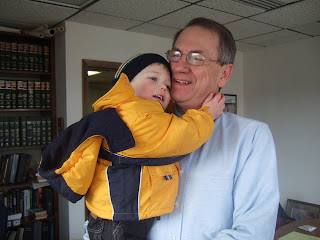 So, I've realized that maybe these bits are just for me. Gifts, presents, just for me. On our fifth wedding anniversary, M had a beautiful vase filled with five roses waiting at our table for us. I gave a rose to our waiter to give to his wife when she got home. M was surprised and I thought why not share the love? Now. Hm. I won't get saccharine or nutrasweetish on you. I won't tell you that "every moment is precious," because they aren't. Some moments are messy and stinky, like changing Bug's diaper. Some are just rotten or boring or repetitive. But I will say that some moments are just gifts and lately, I am humbled and thrilled to receive them.