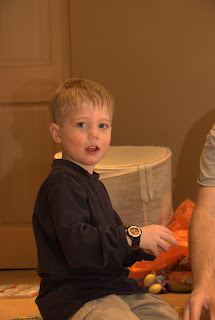 I often get lost in my own thoughts. So much so that sometimes I think it offends people when really I have no idea that I've been enjoying the putterings of my own brain completely. Today I took the Bug and the Babe to see the Roman sculpture exhibit from the Louvre. I like going to art museums with the Bug because I get to see what's important to him. As usual, today he was interested in the animals and the maps. Bug and I were looking at this sculpture of a man with an eagle at his feet and I asked Bug why he thought an eagle was on this man's sculpture and then Bug and I got lost in our own respective thoughts. I was thinking how the tip of the man's nose had gotten knocked off and over a thousand years in the ocean, that nose might just be one of those pebbles I took out of the stroller. I was trying to think about how to explain this to Bug and then he interrupted my thoughts with his own thought. He says, "Papa's penis is bigger than this guy's." There was no mistaking that Bug belonged to me. He was there, in the museum with a little kid voice and in my arms.

No, the SAM does not have emergency trap doors and the necessary secret slide system for mothers mortally embarassed.