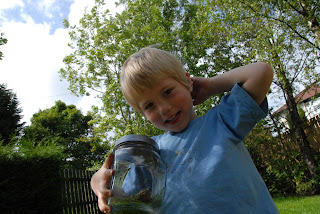 This little guy is cool. I mean really cool and level headed and very sure of himself. It is a marvel to watch in such a young person. He handled the "canteen" at school like a pro. He held my hand all the way to school even though most kids don't hold their mamma's hands just because he likes me "more than most." He helps me tidy the house, in exchange for "a bit of telly of course," and he wears his school uniform without a fuss because "it suits" him "just fine."

I used to never make my bed. Like, never. Ever. Never. Never, ever, never was the bed made in Jenna-Jenna Land. Mostly because, if a bed was made, there was no telling who lived there. If my bed wasn't made, well I could tell you exactly who slept there. Me. Who wanted a show-room bed? They smelled funny and felt funny and you could never tell if Goldilocks had broken in and snuck a kip on your spun cotton if your bed was made... 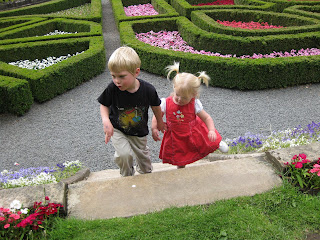 The other day I was showing my parents and Zizi around the new rental house via skype. Last minute, as you does with your parents and sis on skype. We passed by my bed unmade and they laughed, "Nothing new." I laughed and said, "No, no. I make my bed now. It's been 20 years since I lived at home. It's just that G woke up from her nap before you called." There was a pause. Ah, yes. 20 years had passed. The truth is that as I've gotten older, I make my bed. The rest of the world seems so disorderly that a bed well-made with the weight of worn flannel sheets on an Autumn night is better than heaven. The other truth is that in those 20 years of becoming increasingly in need of order, I've also given birth to two very busy children. I need some order woven between the oatmeal stuck on my jeans and the playdough ground into my carpet. So, I make my bed in the mornings. 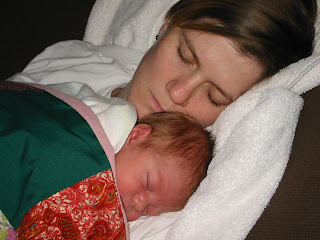 Then I put Maddox in my bed at night, 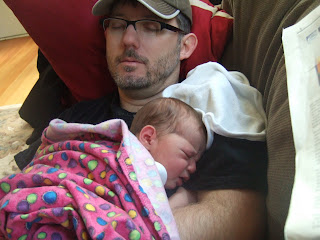 And Gigi in my bed in the afternoon because their smell is left in the creases and folds of my sheets. When I crawl into my bed unmade by their youth, I can smell them as distinctly as when I first held them and rested.

I went to this book club last night and I was the youngest at the club. The oldest, Joyce, was 8 years old when WWII started. They were in Yorkshire and housed a Jewish intellectual who was smuggled out just before Germany began to use incinerators under the Nazi government. The intellectual had lost his family. All of them. Everyone. He was pro-war. Her father, a pacifist. They were housed under the same small roof and shared a deep friendship with each other. I think they must have had an understanding about the skill of debate that contemporary society has lost. Debate is an art to be practiced amongst friends, rather than a war to be won against enemies. I like living here because I didn't stumble into stories like this in the States. I like that I easily find friends of all generations and that they like how I listen. No pictures today. I'm hoping this entry finds you with pictures of memories floating in your heads and thankful for your friends and their stories.
Posted by Jenna at 3:41 PM No comments: 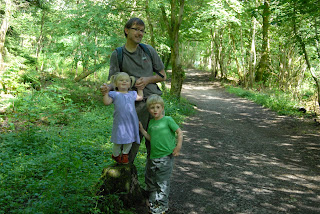 When M goes for work, I lose sleep. A lot of sleep. I just don't sleep well. It's gotten better within the last two years, but I still really get affected by a lack of sleep. I get spacey and a little dingie in the brain without it. Sleep and a good book is my prescription to cure all ills. So, Matt is away this week and last night the kids were being particularly kid-like. The dinner, bath, bed routine is a wild one in any household and particularly wild in my household as my son likes to pretend he is a different animal every 10 minutes throughout the course of the evening. He began last night as a t-rex that likes to swim and became giraffe without dairy allergies, a real pretend baby seal not caught by poachers, a moose, a mongoose, a monkey-type-lemur that is undiscovered yet on a tropical island near Scotland, and an otter that likes vegan chocolate. Identity changes in the matter of a second. If I don't keep up, well, that throws the whole evening off. DUH. G followed suit and squaked and barked and howled and chirped as needed. Well, except for the lemur bit. She wanted to be a tucan and said, "No. Want to. G tucan. Tucan." and flew off by flapping her arms and flapped a bit too hard and slipped and hit her head and howled. 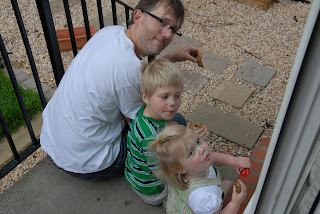 I am so sleep deprived that by the time I corraled the howling and squaking children up to brush their teeth I thought, "How could these evenings go more smoothly?" Then, I thought, "an accountability flow chart." Then, I daydreamed about all the flow charts I had seen when I worked at the hospitals and schools and then the children became killer whales while wrestling with their blankets on the floor and toothpaste and boogars were smudged everywhere. Then I thought maybe I just need some sleep. 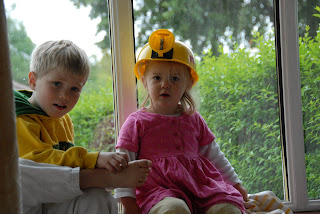 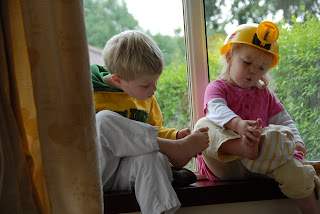 I travel with my husband and kids to London for the weekend and I get grumpy. The trainstation doesn't have a garbage can. That's why Glasgow is so messy and dirty and littered compared to other cities we've lived in. There aren't any garbage cans, EVEN at the train station. No one knows how to use the garbage cans that are out because they're not available in the most public an used places, THE TRAIN STATION. And get huffy and puffy and grumpy and all certain I've solved this social ill until 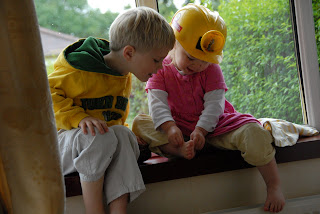 Matt says that people put bombs in garbage cans. Oh yes. Now I get it and he's not exaggerating. They do. Not in Glasgow, but that's because Glasgow doesn't have garbage cans at the train station to put their bombs in...and so I think it is good to travel and try new things if only because it reminds me that my silly little corner of the earth in my brain is not the only corner of the earth that is right. I am so thankful I am here and with my family that loves me and in a safe place to learn how very silly I am. 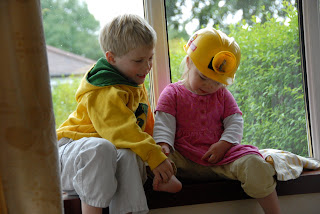 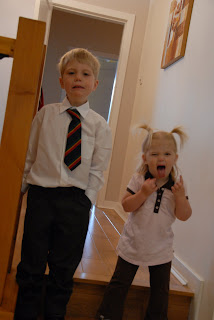 Imagine if you will, me in the background saying things like, "Alright. Alright. Let's take a nice picture for school. Nice picture means no sticking out your tongue. It means that you should smile or pretend you are a quiet animal that is also a happy animal like a red panda or a turtle." These types of animals are quiet and happy in our family's personal folklore. I was so focused on getting a nice school picture, I didn't realize G was in the picture too. Bug is just bored with the whole thing; his tie, his school uniform, the fact that I've got the camera out, his sister, his sister, his sister. G is pretending to be UB who has a rock band. We looked at UB's rock band pictures from over a year ago in Seattle just the other day. She likes to pretend she has a guitar or drums and makes this face and says "UB! UB!UB!" I'm keeping and publishing these pictures as bribery and blackmail are good parenting tools. Not good business tools mind you. Just good parenting tools, I think especially in the case of a misbehaving teenager. I find her feace so funny that I'm sure that as a stormy teen she will groan when I pull these out and say, "If you are a brat to me in public, I will show the public your rockstar face from long ago." I also find myself thankful that UB makes this face and plays instruments better than G. For the moment anyway. We miss you UB! 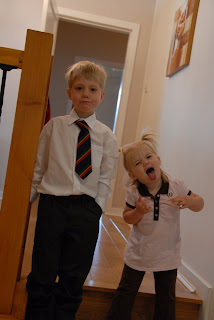 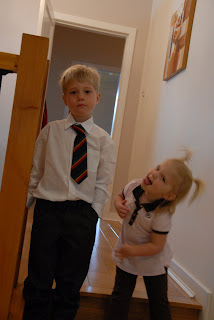 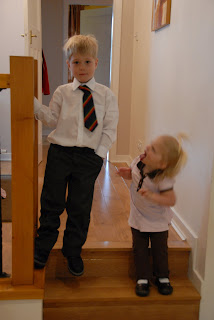 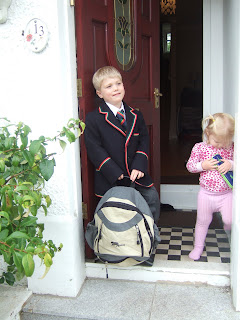 Bug started Primary school here. It is the equivalent of elementary school, sort of. Anyway, he's got a uniform and it's really nice. Very little worry about what to wear. I'm only concerned that it is clean as dirt and snot and general detris seems to find its way on just about everything since having the littles. Bug is the youngest in the school and that does not worry me as I know he is ready for school and the routine and the projects. Mostly, I am worried if the school is ready for him. 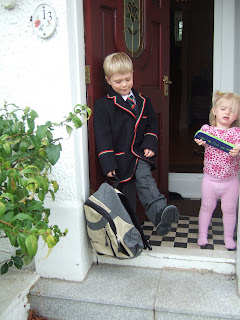 Case in point:
Me "What did you like about school today?"
Bug, "T"
Me (abbreviated conversation summed up as "Tea? T? Tee?" beverages, the letter, a golf tee....we are in Scotland and these are all up for grabs)
Bug "T. The letter. Then I drew the letter T and I drew a T rex and the was T rex in Zizi's yard in Alaska and I pretended I was the Trex for real and that I did not eat the Mama Moose or the Baby Moose because I am a vegan T rex but very vicious and I devour plants and broccoli and buildings in Alaska but not mountains or Zizi's house and I don't know why you have to make the T just that way with lines and things because it doesn't look like a Trex. Did you know that Mama? Did you know the letter T does not look like a T rex at all." 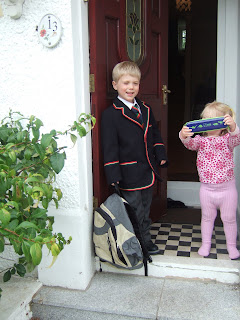 Me "No. That's a bummer. The letter T does not look like a T rex."
Bug "Why?"
Me "Because it doesn't. If you don't make the letter T just the right way, no one can read what you are trying to write to them. Like your grandparents wouldn't be able to read a note you write to them."
Bug "They don't need notes because they are Trex like me in Alaska. I like soy milk too. In Alaska. This T rex drinks soy milk in Alaska."
Me "You can have soy milk in Alaska, but you still need to make your letters so that people can read them."
Bug "Well who made the letter T?" 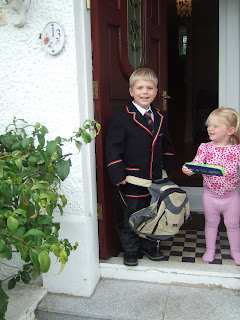 And yes, I need to dress G just before we leave for school. Otherwise, given five minutes, she undresses herself and I have to re-dress her and then we are late for school. Late in Scotland is akin to sin punishable by death by T rex.