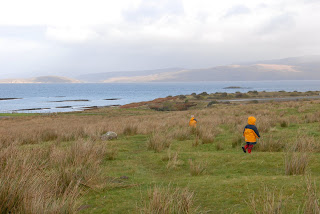 My Dad brought me up to say, "Yes, sir." He taught me to be particularly polite. To everyone. It is so ingrained in me, it is a knee-jerk reaction and one that I'm proudly teaching my children. When they are old enough to talk, I ask them to say, "Thank you, sir." Or, "Yes, miss." Once, when I was younger and didn't understand the difference between Miss and Ma'am, I requested an old lady that smelled of violets to ,"Excuse me, miss" in the grocery store. She was so happy and twittered that she hadn't been called "Miss" in decades. 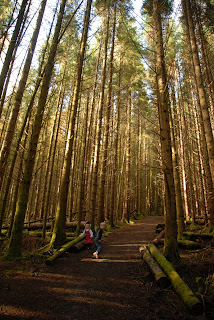 The longer I'm here, the less annoying the surprising differences between cultures seem to be. But, the longer I'm here, the more proud I am of being an American, because the differences really matter to me. I like that people are shocked when I ask my children to say "Yes, sir." It is polite and shows an immediate respect for someone because they work hard, too. Here, the word "sir" has a history of wealthy, land-owning, gentlemen who treat others according to a now unspoken hierarchy. So, when you say, "Yes, sir," it is a clear mark that I am American. That we won the war for Independence and that everyone is deserving of respect. If you think I'm over-analyzing, you must visit and have my children say, "Yes, sir," to the guy digging the ditch for sewers and for his patience in explaining what he is doing to my nerve-gratingly curious children. Then, you need to hear the ditch-digger say, "I'm not a sir. I'm a working man." To which I say, "My children will refer to you as sir." 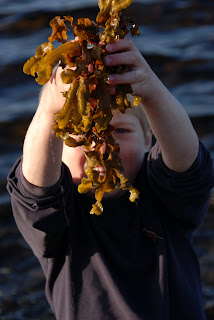 So, the paper guy at the village, I always refer to him as sir. He told me once that he was a "working man." But I still call him sir and he let's it go. I found out today that one of the local papers was giving away free lego sets with each purchase of a paper for two weeks. A different set every day. I went in and bought my second/not-my-usual paper of the day to collect my lego - fun stocking stuffer for both the kids! He asked me about my second paper purchase. I said I had just found out about the give-a-way that very morning. He nodded, went to the back room, fished out the last week's give-a-ways I had missed and said, "There's another week's coming. Buy your paper on Saturday for sure though. There's a larger one coming as a surprise." In my very American way, I said, "Yes, sir." He chuckled at me as usual. Mommy-talk on the playground informs me that he has not done this for everyone. Thank you, sir. 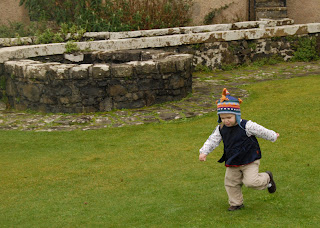 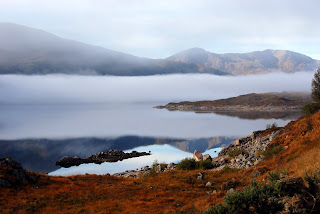 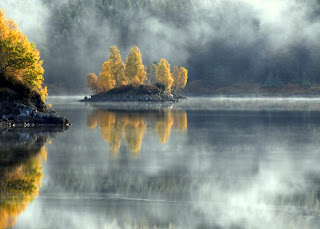 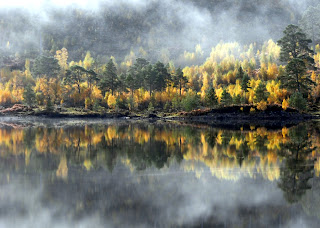 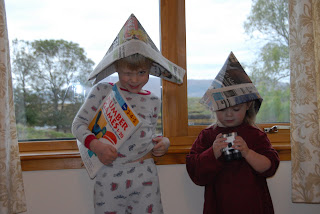 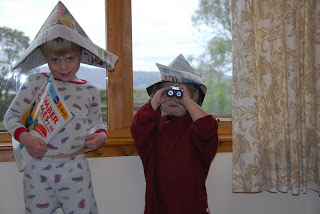 Tonight I made dinner. I swear that I feed and water the children daily. Even hourly, or even every 15 minutes, depending on the day and their moods. Yet, I feel I'm not quite understanding their dietary needs or wants. For example, I made their favorite pasta sauce tonight. They love it. Eat it regularly. I make it knowing that they will most likely finish their plates and ask for more. I make it when I've been a bit too experimental. I am a dictator, but not one without wanting to please my minions. But, I am missing something regarding their diets. Tonight, they came into eat their favorite meal and instead of saying "Yummy pasta!" they said, "OOOOO! BREADSTICKS!" 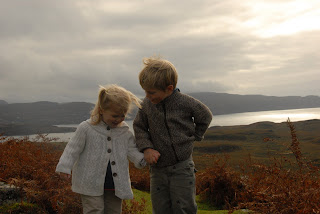 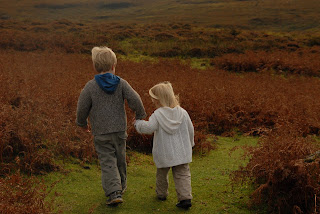 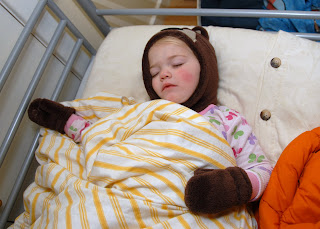 I have said before that I suffer from a touch of insomnia. Everyone has a cure and everything works for a while and then said-cure fades and I've got another bout of insomnia. I have never tried sleeping with a "hunnybear" halloween costume on. It seems to do the trick. I've also always said that I learn loads from my children. Point taken G! 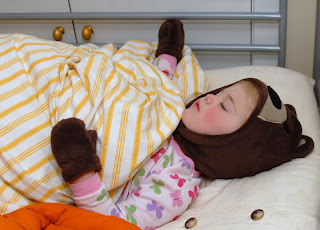 p.s. the mittens were too small. To avoid blue, circulation deprived hands, I removed them while she slept. This move apparently compromised HER TRUE INNER CORE. About 2 hours after I removed them mid-slumber, she woke with a terrified scream. Her paws! Her paws!? Where had her paws gone?!!! No wonder I've got insomnia...

Worry about the mountain... 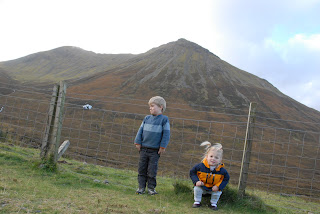 An abstract summary of my day is as follows:
Love Bug (who now wants to be referred to as Fizz Wiggle on the blog due to our recent reading of the BFG by dear Mr. Dahl...), embodies some character for most of the day. Here, he is pictured as a five-fingered dinosaur from the Jurassic period. I believe he may be an Hadrosaurus, but I'm usually wrong or late with my guesses as to the names. For example he was an Hadrosaurus, but is now a Megasaurus, but I digress. Fizz Wiggle, in character, is searching out for danger or prey most of the day. Thankfully, all of the meat eaters he becomes do not eat mommies or sisters, and only sometimes devour daddies. 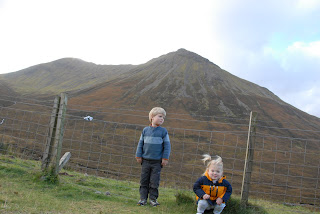 G is usually just hanging out, ready to join in whatever needs to be done as long as HER TRUE INNER CORE is never compromised. In other words, if Fizz Wiggle must become a Hadrosaurus, so be it. She will be a Bifluridan or a leather-winged creature or whatever it is that Fizz Wiggle calls her to be, but DO NOT TAKE HER FOOD. DO NOT WEAR HER CLOTHES. DO NOT TOUCH HER PIGTAILS. DO NOT, well, the list continues and fluctuates as to what defines HER TRUE INNER CORE each day. Usually, there's not much guessing on a per diem basis. If you stumble upon said elements that define HER TRUE INNER CORE that day, you are also hurting - emotionally, physically, psychologically....somehow you are hurting. 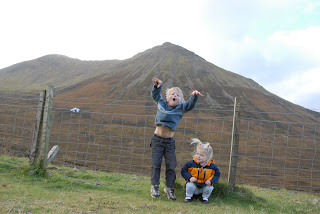 I am the outsider. I take the pictures. I record moments in my journal. I write the blog. But these are really just the things I do while I hope that neither of these two shed blood or perform irreversible damage to themselves, others, small animals, or objects of any kind. 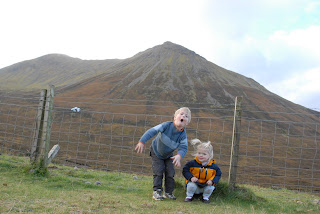 You look at these pictures. You look at Fizz Wiggle leaping to show you his pre-reptilian strength. You look at G ready to just roll with it unless he tries to mess with HER TRUE INNER CORE. I'm sure you think, "Ha! Bet you weren't worried about the fence behind these two?" To which I reply, "Yes, I was worried about that fence." Then you roll your eyes and say, "Yes, whatever. Were you worried about the mountain in the distance?"

Yes. I even worried about the well-being of the mountain in the background with these two in the foreground. Poor mountain. Poor, poor mountain. 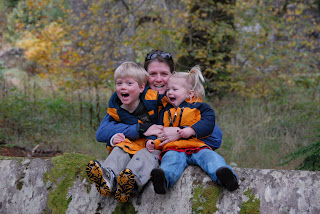 I know something would be terribly wrong if they grew up any slower. Still, every so often, I try to squish them very hard and see if they slow down at all....just even an extra unexpected moment or two might be fun for us all. The Isle of Skye was great. Glad you weren't there though....I got these two cuties plus my husband alllll to myself for a WHOLE week! Better than Santa at Christmas for me!

G sleeps in the car while I look across the inlet to Castle Eilean Donan (pronounced Aylan Doonahn). I can see low clouds curl up from the water in great gossamer licks as they try to climb the time-softened hills.

Of course, Love Bug and M left to explore the castle. When M says things like, "Go wait on that berm," that means for Bug to stand on the berm, see if he can pull a branch off a pine tree, pretend he is a dinosaur guarding the castle, roar at pedestrians just trying to find the path to the coffee shop, throw 3 stones into the water, and pick his nose all in the time it takes M to grab the camera and a windbreaker from the trunk.

I love seeing that there is a moment in our lives when waiting is this incredibly active. Right now, I am waiting to see if we can rent a house while we are here in Scotland. We could fight our current landlords on their questionable reclaiming of the property in the middle of our year-lease. But really, to what end? We don't want a fight. We want to find an easy place to call home for as much of our stay in Scotland as possible. Even if we could stay the duration of our lease, we would be right back in this very spot come April. Yet, this waiting feels slow and inactive and painful. There doesn't seem to be any trees for me to pluck, or rocks to throw, and I've not picked my nose in a long time (believe it or not Dr. Collier...). I could pretend I was a roaring Deinonycos (sp?), but then everyone would be questioning my mental health...Sigh. The woes of being an adult....

I wish I were as good at waiting as my son. But, I'm just not. Maybe I should snooze through it all like G. That's it. A good book and a snooze, I swear it cures all ills.

You yourself will have to wait for pictures post Isle of Skye return...

just over the next hill 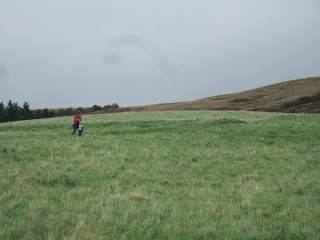 we are off to the isle of skye. i think this picture says why i'm excited to go....