for lack of an ode

A while back I wrote an "ode" to both G and my husband. These odes were the result of my being quite grumpy with news articles that just promoted yucky views on family. I've been wanting to write an ode to my son, to keep it balanced, but each time I start, I get sidetracked into telling stories. For example; 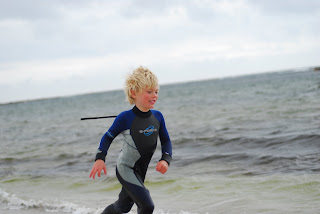 "I love my son because he lives in a fantastical world where anything is possible for anyone...like the time he found out I was pregnant with Babe Newt. He has a brain fascinated with natural history and understands life cycles like few kids do. So while I was surprised when he first said that he knew I was going to have another baby but even more surprised when he then he said that he didn't think it would be a baby dragon but he just wasn't sure."

Ahem. Let me begin the ode again without being sidetracked into a story. 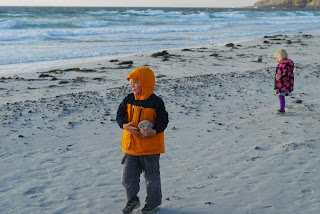 "I love my son because he is interested in people and their stories. He wants to know about you; what you need, what you like, where you come from and where you'd like to go. He wants to help you on your way. We went to the beach to build a fire and watch the sunset on the Isle of Barra. He and G both needed to use the toilet whilst on the beach. He quietly went about digging two deep holes. One for each bodily function. He also spelled the world -toilet- in the sand. He and G used these as the sunset and the waves crashed. Not as sweet as we thought the evening might be, but Big M and I sighed and thought, well, what is the harm? What is the point in stifling such creativity? The next day, at another remote beach, he did the same thing. But, another family came upon the beach. G was running half naked down the chilly shore shouting I-used-the-potty-on-the-beach! as her brother asked the couple if they too needed the toilet. This couple's children were too cold and wouldn't venture off the dunes to the beach. They stared at our family's mayhem and we could see their juvenile wheels turning to use our children's behavior as proof why they should remain in bed despite the beach seals groaning on the rocks beyond. To them, this sad scene is clearly what happens when you commune with nature. Random Americans ask you if you want to relieve yourself on the beach. It was clear, this couple's children were civilized. We were left a bit confused. Do we explain that our son is a caretaker? Only interested in the well-being of others? Do we explain that we really aren't red-necks? Or maybe own up to our apparent red-neck tendencies and offer them some of our lunch too to show that being a red-neck also has a hospitable side? Or would all this talk just make it worse? We really couldn't make a decision in a timely manner as we were laughing too hard. The family left quickly."

I think I will try to write my ode when I'm grumpy with a family image in the newspapers. I seem more succinct when grumpy.
Posted by Jenna at 12:36 PM No comments: 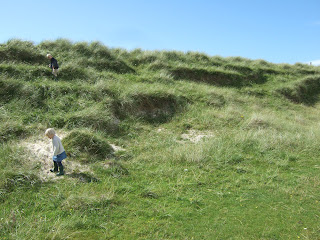 Often, I marvel that we only have the one word "love" to mean so many things. I mean really. I love my new vegan chocolate sauce and I also love my family. I think the reason we don't come up with more words for the different kinds of love that exist is because there are simply too, too many ways to mean the word love. Better to give up, use the word "love" as often as possible and move on to more easily attainable goals.

I love pictures like this of my family. People I love more hugely than words and laughter or my ego or my joys and desires and failures. I love them so much that every day I learn yet another way to understand and use the word "love." Yet, they are here, these people I love so very large and in such variant and strong ways. These people, bearers of my large love, look small traipsing through the earth's secrets in sands and dune grass. In these pictures, the landscape almost looks bigger than my love for them. Almost.
Posted by Jenna at 1:10 PM No comments:

Cockles and Mussels and Kids, Oh My! 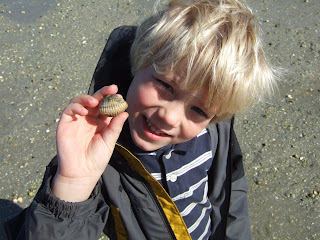 It is important to me to have polite children. Not nambie-pambie suck-ups. Just reasonable and polite children. A "please" or a "no thank you," serves my wants just fine. The older I get and the more states and countries I travel to and live in, the more I know politeness matters.

However, I think I have unwittingly also supported the mental nimbleness that, quite frankly, exhausts me daily with my kids. For example, on a beautiful morning on the Isle of Barra, we collected cockles and mussels for eats that evening. These delicacies were once thought of poor man's food as on the islands they are free and plenty for the taking. If your sheep failed, and your built-up stone plots for farming failed, you could always eat these lovelies til things got better. Nowadays, in the city, a pot of mussels in a garlic sauce cost the equivalent of 16-25$ depending on where you go... How could we resist such expensive food for free on the beach?

We just got back from the Isle of Barra. School has also begun and of course there seem to be too many stories to tell. I will start with the simplest. This view that met us after our 3 hour drive and 5 hour ferry. No phones. No email. Just this view. The planes land according to the low tide right there on the beach and there is a wee air terminal off in the distance. More soon. Enjoy. 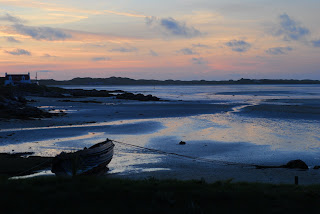