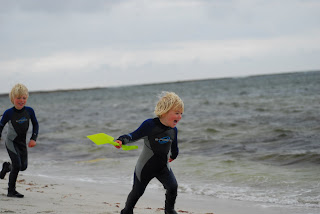 Sometimes I think I do more wrong than right. I worry about decisions regarding their school and discipline and health and life in general. I think you all know by now that I am also delightfully neurotic and so it isn't simply that today I've a small worry about, say, sleeping habits, whilst making toast and leave it at that. It is more like when I start to worry about sleeping habits, these worries quickly tumble into logrithmicly expanding terrains that end up in my having an existential crisis on behalf of everyone in the family. Really, I know it's a favor and a skill that I know they could do without. It is simply too much to put on such small people - nevermind my own growing soul. But then, I find a photo like the one above. Then, my delightfully neurotic side shuts up. For a very long time. Because, you see, there is evidence that I need not have existential crisis, even for the youngest of my family. There is evidence, photographic evidence, that I am doing things alright. Sometimes.
Posted by Jenna at 1:48 AM No comments:

Notes on the Isle of Barra 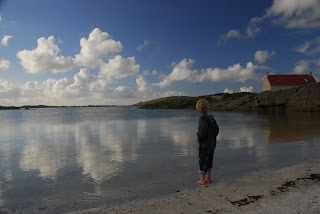 I thought rural was driving out to my grandmother's or my uncle's farm in Minnesota. Both were about a twenty minute drive outside of town and they seemed far sitting in the backseat with the winter sun long set after a family celebration. Now that I'm older and I've lived in Scotland, I realize that is not rural. It is certainly not city or suburban - even with urban sprawl taking place. But it is not rural. Maybe country, but not rural. Rural, I've found to mean something a bit different since traveling to places like the Isle of Barra or even twenty minutes outside of Glasgow. Rural is access via a road only large enough to fit one car with pull-out spaces for the rare car to car meeting. Rural is difficult for a visitor to find a phone or surf the internet. It is static-y radios and busy days filled with fresh air. Rural is where sheep and cows graze with a view and have more motorway rights than cars. Rural is a place and time where you realize how very loud the quiet can be. And, in this quiet there is comfort and an invitation for all the creatures roaming about a 5 y.o. boy's head to come out and play...
Posted by Jenna at 3:03 AM No comments: 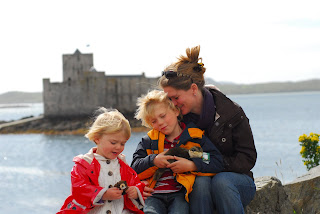 Nothing screams "sheltered middle class white mother" like my shock over a recent gang beating that took place on the main road to my husband's work.

The Brits think the Yanks are nuts for the amount of guns available and sold in the States. The U.S. is also apparently also one of the main manufacturer of guns for the world.

A part of me, maybe, if I'm honest, it is the "sheltered middle class white mother" part of me, sees the Brits' point of view. There is gun violence and a sad amount of deaths involving guns in the U.S. Why have them available if there are accidental and not-so accidental deaths from them? Here they are heavily controlled, yet, I'm not finding a void of gun violence.

If anything, there is a remarkable number of violent gun deaths considering this strictly gun-controlled island country is not much larger than Minnesota and Iowa put together.

The native Glaswegians I've asked about this recent event shrug it off. They say that gangs hurt gangs and that innocent bystanders rarely get involved. I dunno. If I'm about to die, innocent bystander or not, I'd rather it be quick - the way an abbatoir kills the animals we eat - than being shoved off the side of the road and beaten beyond a hair's breath and then live knowing someone wants me gone.

No, I'm not saying I want to be caught in crossfire or that I have a deathwish or even wish to belong to a gang. But I am tired of this stereotyping of gun-users in the States. The U.S. is not filled with rabid gun slingers ready to pop innocent bystanders for not correctly ordering a mocha at Starbucks. My uncles are hunters. My kids' uncle is a hunter. My husband learned to shoot cans in the Arizona desert with his grandfather. For him, it was time in the quiet without the worries that come from a child stumbling through adult concerns. No one has been hurt. If there is to be an end to gun violence, even in heavily controlled societies, then thoughtful teaching of gun use and the value of life has to happen. Not juvenile fingerpointing at cultural preferences founded in historical necessity. I want my children to neither be caught in crossfire nor be beaten to a pulp.
Posted by Jenna at 12:45 PM No comments: