ever in the world 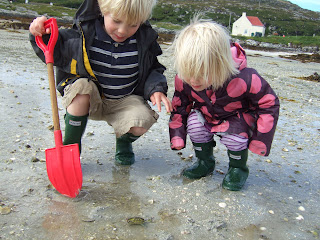 But, as usual, I was wrong on both counts. Firstly, I was wrong on the meaning. "Ever in the world" is a phrase unique to him alone. It does not mean best and it does not mean forever. Loosely defined, as far as I can gather, "ever in the world" is his marker of moments and people that he realizes are threads woven in the fabric of him. Secondly, I did not lose it undocumented. Certainly, not now as I am documenting. But less obviously, I did not lose it to kid whose language use is naturally maturing. He simply doles this marker out much more wisely and judiciously as he ages. Tonight we had a rough night at the outdoor concert. It was his first outdoor concert, he was tired, he wanted to run and scream, and I wanted to scream, "SIT DOWN AND SHUT UP! NO ONE CAME TO THIS SUMMER CONCERT TO HEAR YOU!" But I didn't. Instead, I was a good parent that calmly and steadily butt heads with my tired, sweating, and limit-pushing son. Finally a few songs into the set, he figured out what this outdoor concert thing was. He then put his over-heated face on my shoulder, pecked my cheek, and whispered, "You are ever in the world." Then, he sat down on my lap and we sweat listening together eating pistacios and watching the world go by. It was the first time he had said this phrase in a long while and I don't mind a bit how hard I had to work for it.
Posted by Jenna at 9:58 PM No comments:

as wide as it is deep 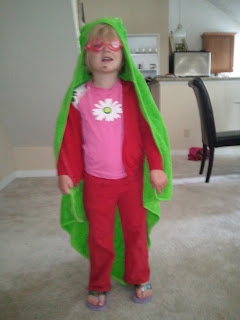 Yesterday we spent the day with some dear friends from Seattle. They drove down to say howdy and spread a bit of love. It was lovely. It was so lovely that the children and daddies, who have not seen each other in three years, simply slid right back into the way things always were. Conversation was easy. Laughter was even easier and even the tears over sad-happenings-to-be-caught-up-on were shed in comfortable manner. It was so comfortable and easy that when our dear friends pulled out some stripey-dotty-monkey socks for G and she put them on promptly to wear in the pool, no one blinked an eye. No one wondered or tried to co-erce her into a sock-free pool dip. No one glanced at me as a way for clarification or to see if I would mind. No one tried to teach her that socks in the pool, especially cotton stripey-dotty-monkey socks, have never been worn in the pool. No one tried to teach her such unspoken social rules outloud. The kids didn't blink or laugh. The adults didn't wonder or even comment on her crazy pool attire. We all knew that if we just let her wear the stripey-dotty-monkey socks in the pool we would have a great time and not because we avoided a tantrum. We knew we would have a great time because we adored each other just as we are...and as G is, this includes wearing whatever one wants to wear in the pool. 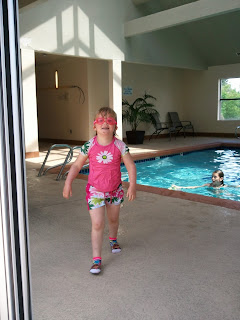 I have many friends like these littered over the globe. They truly pop out from bushes like woodland fairies in the most necessary of times. Some think that this fact is sad, my world-wide friends. And, it is sad to miss people. But, I also find it as evidence that my friendships are as wide as they are deep. We are readying ourselves to grow a new batch of friends here to add to their good company. Also, thanks to the D's, we have enough socks for everyone we meet along the way. The water's warm an we're ready for a dip!
Posted by Jenna at 3:42 PM No comments: